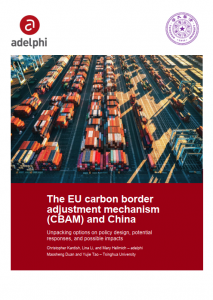 The EU has announced ambitious new climate targets, pledging to reduce greenhouse gas (GHG) emissions by 55 percent by 2030 and achieve carbon neutrality by 2050. To help achieve these goals, the EU proposed implementing a carbon border adjustment mechanism (CBAM) in its European Green Deal legislation. The CBAM would operate alongside the EU emissions trading system (ETS), the bloc’s flagship climate policy, in order to prevent carbon leakage, protect industry competitiveness, and safeguard the EU’s new climate targets. As the EU CBAM will put a price on the GHG emissions embedded in goods imported into the bloc, the mechanism will have a significant effect on both international trade and climate diplomacy. Understanding how the CBAM will impact China is critical, as it is one of the EU’s main trading partners and has also announced it own carbon neutrality target. China’s perception of and potential response to the EU CBAM will have a significant impact on the mechanism’s design and implementation.

Against this backdrop, experts from adelphi partnered with experts from Tsinghua University to provide an understanding of how the EU CBAM might impact China and how it could become a vehicle for climate cooperation between the two regions. This report offers an overview of key CBAM design features, how the mechanism would interact with current climate policies in the EU and China, stakeholder views on the mechanism from both regions, and how the EU CBAM could impact China’s exports to the EU. It also provides policy suggestions to both EU and Chinese policymakers regarding the CBAM and other climate measures. The paper is based on research by means of qualitative analysis.